FreeRTOS on the Cortex-M4s of a Apalis iMX8

The i.MX8QM applications processor is a feature and performance-scalable multicore platform including 2 Cortex-M4 cores. These secondary cores typically run an RTOS optimized for microcontrollers or a bare-metal application. Toradex provides FreeRTOS™, a free professional-grade real-time operating system for microcontrollers, along with drivers and several examples that can be used on our Apalis iMX8QM platform. The FreeRTOS™ port is based on NXP's MCUxpresso SDK for i.MX8QM.

The build system supported to build the firmware and examples is:

The 2 Cortex-M4 CPU cores live side by side with the Cortex-A53/A72 based primary CPU cores. Both CPU complexes have access to the same interconnect and hence have equal access to all peripherals (shared bus topology). The graphic below is an incomplete and simplified drawing of the architecture with emphasis on the relevant sub systems to understand the heterogeneous asymmetric multicore architecture. 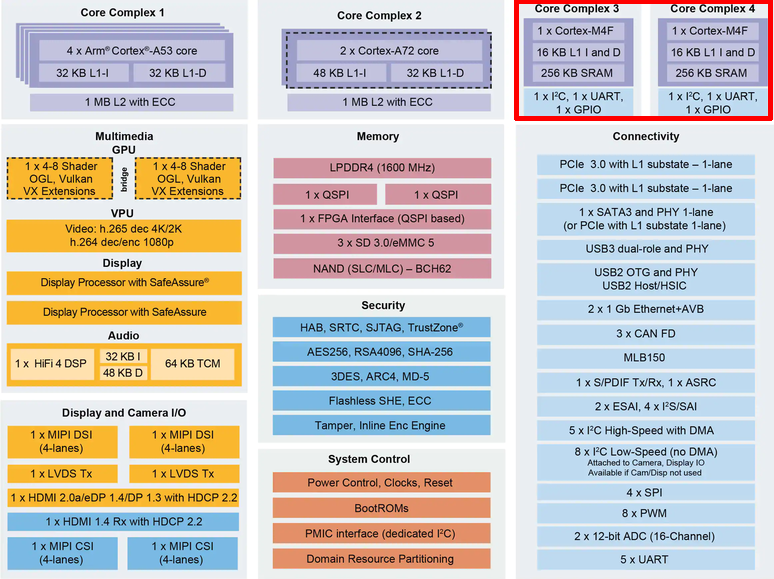 A traditional microcontroller typically has internal NOR flash where the firmware is stored and executed from. This is not the case on the Apalis iMX8QM: There is no NOR flash where the firmware can be flashed onto. Instead, the firmware needs to be stored on the mass storage device such as SD-card or the internal eMMC flash. The available mass storage devices are not "memory mapped", and hence application can not be executed directly from any of the cores (no executed-In-Place, XIP). Instead, code need to be loaded into one of the available memory sections before the CPU can start executing it.

The two CPU platforms use a different memory layout to access individual sub systems. This table lists some important areas and their memory location for each of the cores side by side. The full list can be found in the i.MX8QM reference manual.

The standard FreeRTOS and bare-metal examples provided by NXP use the M4's tightly coupled UARTs to communicate with the user. This section describes how to configure the Apalis Evaluation Board V1.1A in order to make the required UART ports accessible from your development PC, and how to load and run binary examples.

The setup supports either to run samples in M4 core 0, or in M4 core 1, but not on both cores at the same time.

Rotate the Apalis Evaluation board (EvB), so that the SD card sockets and audio connectors are pointing towards you.

Connection between Apalis Evaluation Board and PC​

Configuring the Evaluation Board​

In order to run the regular examples on M4 core 0, the following jumpers on the Apalis Evaluation Board (EVB) need to be removed:

In order to run the regular examples on M4 core 1, the following jumpers on the Apalis Evaluation board (EvB) need to be removed:

At the time of writing this article, the tested U-Boot version was:

hello_world_m40.bin is the name of your application and the trailing 0 stands for core 0.

To run the example on core 1 instead, simply replace the trailing "0" with a "1" in the command above.