FreeRTOS on the Cortex-M4 of a Verdin iMX8M Mini

The i.MX 8M Mini applications processor is a feature and performance-scalable multicore platform including a Cortex-M4 core. This secondary core typically runs an RTOS optimized for microcontrollers or a bare-metal application. Toradex provides FreeRTOS™, a free professional-grade real-time operating system for microcontrollers, along with drivers and several examples that can be used on our Verdin iMX8M Mini platform. The FreeRTOS™ port is based on NXP's MCUxpresso SDK for the i.MX 8M Mini.

The Cortex-M4 CPU core lives side by side with the Cortex-A53 based primary CPU cores. Both CPU complexes have access to the same interconnect and hence have equal access to all peripherals (shared bus topology). The graphic below is an incomplete and simplified drawing of the architecture with emphasis on the relevant sub systems to understand the heterogeneous asymmetric multicore architecture. 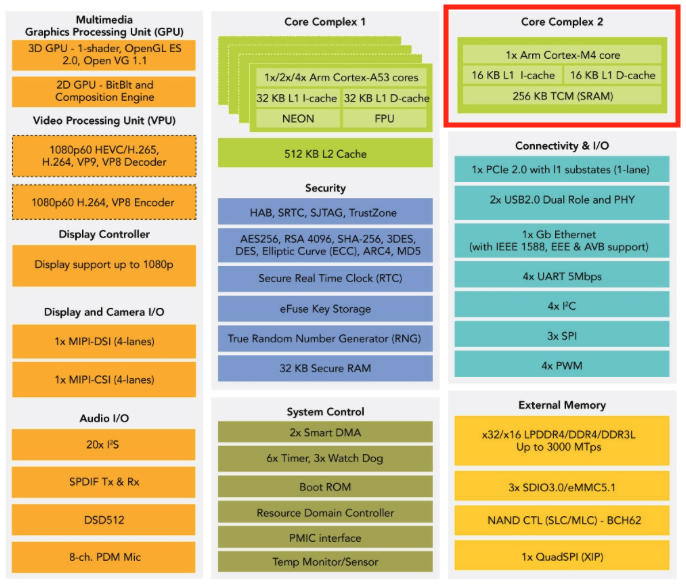 A traditional microcontroller typically has internal NOR flash where the firmware is stored and executed from. This is not the case on the Verdin iMX8M Mini: There is no NOR flash where the firmware can be flashed onto. Instead, the firmware needs to be stored on the mass storage device such as an SD card or the internal eMMC flash. The available mass storage devices are not "memory mapped", and hence application can not be executed directly from any of the cores (no Execution-In-Place, XIP). Instead, code need to be loaded into one of the available memory sections before the CPU can start executing it.

The two CPU platforms use a different memory layout to access individual sub systems. This table lists some important areas and their memory location for each of the cores side by side. The full list can be found in the i.MX 8M Mini reference manual.

The standard FreeRTOS and bare-metal examples provided by NXP use UART_3 on the Verdin iMX8M Mini to communicate with the user. This section describes how to access in order to make the required UART ports accessible from your development PC, and how to load and run binary examples.

Install the cross-compilation toolchain and dependencies​

Some Linux distributions might already offer the Arm toolchain in their repositories and you can install it from there. On Ubuntu, for instance, run:

After extracting the SDK you've just downloaded, go to <sdk-directory>/boards/evkmimx8mm/demo_apps/hello_world/armgcc.

The included build scripts expect the ARMGCC_DIR environment variable to be defined. This is your toolchain directory, e.g.:

If you've installed the toolchain using your package manager, then run:

Then run the built-in build script:

This will build both the debug and release versions of the application for all possible targets (DDR, FLASH and RAM).

Copy the resulting binary (e.g. hello_world.bin) to an SD card for the next steps.

Connection between Verdin Development Board and PC​

At the time of writing this article, the current U-Boot version was:

hello_world.bin is the name of your application.