From BlackBerry® QNX - About us:

Through sophisticated software solutions BlackBerry QNX helps ensure the proper operation of embedded systems that require mission-critical and life-critical operations. Since 1980, BlackBerry QNX has established itself as a trusted partner for companies building vehicles, medical devices, heavy machinery, power and energy, robotics, and industrial automation systems that are required to be safety-certified, extremely reliable, and highly secure.

This Partner Demo Image makes it easy for you to evaluate QNX on Toradex Computer on Modules since you can deploy a pre-compiled binary image to the hardware in a few steps. It is also a great starting point since it saves time and costs since you don't need to port a BSP from zero but instead use the BSP source-code to add your customizations on top.

There are QNX BSP ports available for other Toradex Computer on Modules in addition to the one supported by this Partner Demo Image. Learn more about all supported SoMs on the QNX software page.

The pre-built evaluation image is provided as-is by Toradex, meant for evaluation only, and it may be suitable for application development as long as you don't need extra dependencies. It is built from the QNX BSP provided by BlackBerry/QNX to Toradex. Read the Detailed Information and Additional Resources on the QNX software page for more details.

It is expected that you customize the BSP, build, and validate your own image before production.

Get and Prepare the Image​

Unpack the image into the root directory of a FAT32 formatted micro SD Card or USB stick, then insert the media into the Ixora Carrier Board.

Once the installation is done, power-off the board and make sure that you have access to the debug UART. Instructions and parameters are the same as from Configuring Serial Port Debug Console (Linux/U-Boot).

This section explores how to deploy and debug a Hello World application to the board. Please note that our summarized instructions don't replace the comprehensive QNX instructions and documentation. If you have questions, search on the QNX documentation.

Make sure to select aarch64le from the Target Architectures, as this is the Apalis iMX8 architecture. 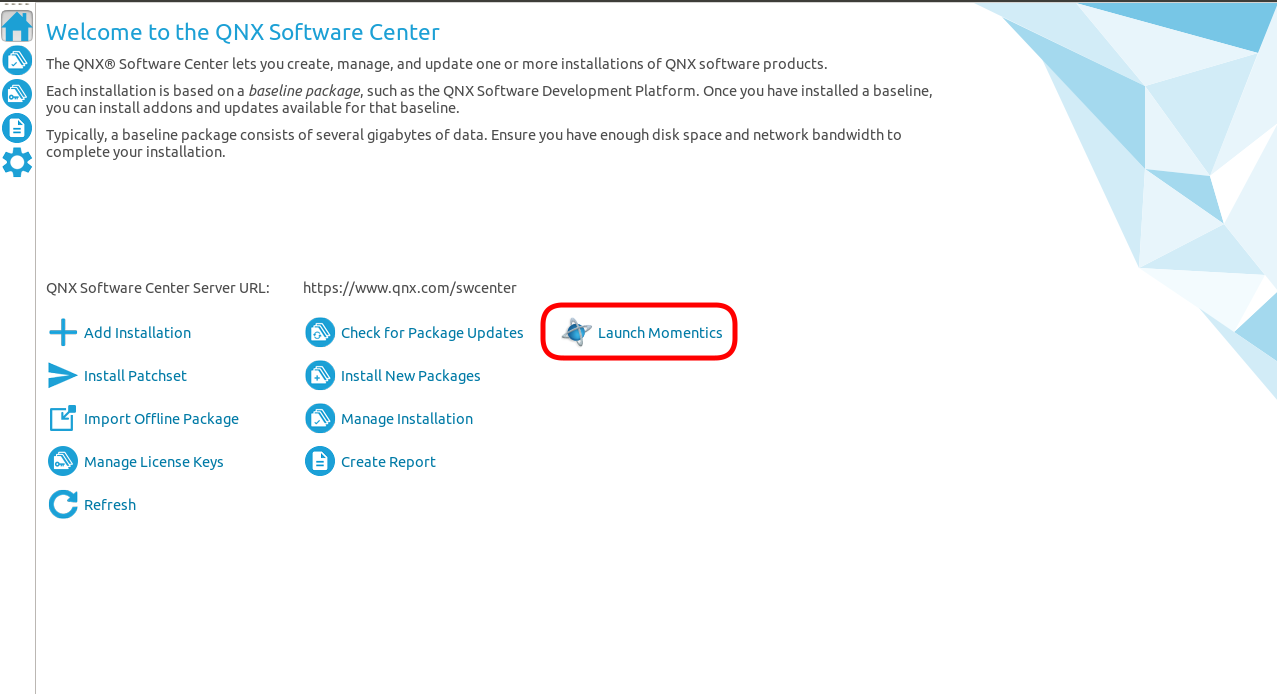 On previous steps, you have discovered the board IP address from the QNX command line. You will use it to configure the target device on Momentics.

On Momentics, create a new QNX Project > QNX Executable named hello-world for the CPU Variant aarch64le. On the configuration bar on the top on the IDE, select Debug, the hello-world project, and the board you've set up on the previous step, then click on the Debug button and the IDE will deploy the binary to the board and run it:

All support for the QNX software is done through our network of accredited partners, including BlackBerry/QNX. Toradex does not provide in-house technical support for your QNX. However, we are happy to help you get in touch with our partners if you need to. To know more, select the most suitable partner from the Toradex Partners (QNX) and fill the contact form provided on the respective partner page, or contact our sales team.

For more information about how to do QNX development head over to the extensive partner documentation.

You must do some customization on the BSP, even if only to prepare the system for production by e.g. removing debug features. You can do it by yourself or through one of our proven partners, including QNX themselves. To get the QNX BSP source-code for Apalis iMX8QM, you must contact our sales team.

The QNX documentation is a great starting point. QNX also provides training, if you are interested get in contact with our sales team and they will connect you to the closest QNX sales representative.

These release notes are strictly related to the test of the QNX Partner Demo Images in Toradex hardware. These notes are not associated with QNX or the QNX software releases.

This BSP is ported to the following hardware:

Downloads are not available since the newer Apalis iMX8QM V1.1B/C is not supported by this image, and it is not available for purchase anymore.