Flash memory is a non-volatile, electrically erasable and reprogrammable computer storage medium that is widely used in electronic devices. As all Toradex SoMs feature embedded flash memory, we are going to provide a brief overview of those.

Limited number of Apalis iMX6 and Colibri iMX6 modules sold during the period from 2022-02-17 to 2022-08-31 are at risk of triggering the Forced Read Only Mode, issue that affects some Macronix eMMC (MX52LM04A11XUI). If you are looking for information of how to check and repair this problem, refer to Check and Repair "Forced Read Only Mode" on Macronix eMMC (errata).

If you are looking for overall information about eMMC memories with embedded Linux, partitioning and configurations, refer to eMMC (Linux).

If you are looking for content on flash health monitoring using Torizon, refer to our Blog: Flash Health Monitoring on Torizon.

Flash cells can be based on two main structures: NOR and NAND gates. The differing structures imply different characteristics, and certain advantages and disadvantages. The below table summarizes some of those.

NAND-based memories can be raw NAND or NAND memory integrated with a controller. This second approach is called eMMC, a solid-state storage standard derived from the MMC standard.

The webinar Flash Memory in Embedded Linux Systems, presented by Toradex, has a good introduction to the topic.

In NAND Flash, the smallest unit of storage is the memory cell. In memory cells, data is encoded using different voltage levels. The different NAND types are capable of setting and reading a differing number of voltage levels, thus providing different data storage capacities per cell. The amount of bits stored per cell has increased as the technology has evolved.

Considering the number of bits stored in each cell, NAND flashes can be classified as:

The diagram below provides a visual representation of the various NAND types:

NAND flash memories have a life span. The write and erase operations contribute to the wearing out of the cells and reduce their life span. An increasing number of worn-out cells can cause the flash memory to fail. The number of times each cell can be written and erased before it wears out is a significant property of these memories and is oftentimes referred to as endurance. The endurance is measured in program/erase cycles (P/E cycles). Different NAND types have differing endurances. In general, increasing the number of data bits stored per cell is contributing to the reduction of the endurance of the flash memory. As we see, the endurance of the NAND flash memory is directly related to the device's life span.

The table below shows a comparison of some of the important characteristics of the various NAND types.

There are two main arrangements of NAND flash cells: 2D (planar) and 3D. The high demand for high-capacity and low-cost NAND flashes led to the development of the three-dimensional memory structure that provides for higher capacities than the 2D (planar) arrangements. The 3D arrangement has been enabled by the application of the so-called charge trap (CT) technology. Using the 3D arrangement, the capacity of the memory can be scaled up by applying multiple layers of cells atop each other. CT technology has simplified the implementation of TLC cells and has enabled the implementation of QLC cells. CT technology has also contributed to the mitigation of the potential reliability issues resulting from the storage of increasing amount of data bits per cell. More information on CT technology is available at the following link: Charge Trap Flash.

The below diagram shows the impact of the NAND type and cell arrangement on the capacity of the flash memories. 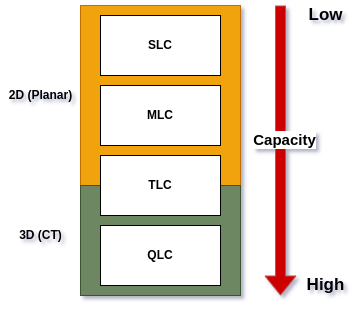 The term eMMC, or embedded Multi-Media Card, refers to a storage technology that is based on NAND flash cells, integrates a controller, and provides a unified standard interface. Formerly maintained by the MMC Association (MMCA), it is now standardized by JEDEC. The standard allows for extensions, such as the eMMC Security Extension.

The flash controller implements several functionalities that aim at extending the life span of these memories:

The table below is summarizing the most important characteristics of NAND flash memories used in Toradex products.

Some of the advantages of 3D TLC eMMCs:

A potential disadvantage of 3D TLC eMMCs is that their endurance is typically lower than that of the 2D MLC eMMCs. However, the increased capacities, the previously described mechanisms employed by the memory controller and the so-called pseudo-SLC (pSLC) mode can effectively eliminate this. For a detailed description of this topic, see the next chapter and the article: eMMC (Linux).

Endurance is a challenge when it comes to eMMCs based on NAND flash technology. In order to improve the endurance, reliability, and performance of the eMMCs, the hardware area partitions of the eMMC can be configured to use different modes. The so-called Enhanced User Data Area (EUDA) mode is standardized by JEDEC and supported by eMMCs implementing the JEDEC eMMC standard 4.4 or higher. In enhanced mode, cells are set to pseudo-SLC (pSLC) mode.

pSLC mode improves endurance and write speed significantly. For example, a 3D TLC eMMC memory that supports 3k P/E cycles in normal mode can support up to between 20k and 30k P/E cycles when using pSLC, almost the same as a 2D MLC eMMC. In pSLC mode, the memory cells are configured to store a single data bit only (instead of 2 bits in case of MLC eMMCs and 3 bits in case of TLC eMMCs). Because of this, the available total capacity is reduced accordingly: a hardware area partition of an MLC eMMC configured to pSLC mode will have half of its original capacity (e.g. 4GB instead of 8GB), a hardware area partition of a TLC eMMC configured to pSLC mode will have a third of its original capacity (e.g. approx. 5GB instead of 16GB).

The below figure provides some hardware area partition configuration examples, one of them employing an Enhanced User Data Area partition (using pSLC mode). 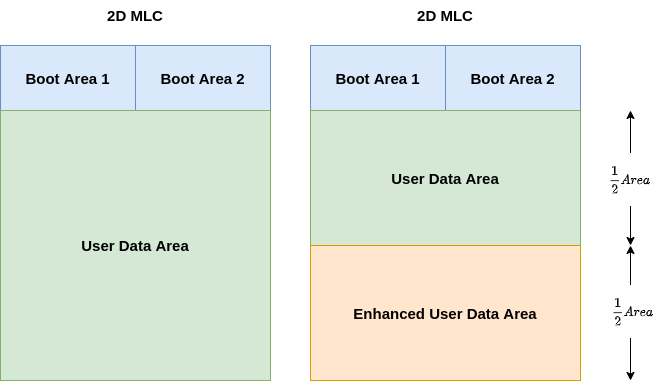 Enhanced User Area, also referred to as enhanced storage is a mode defined in the eMMC 4.4 (MMCA 4.4) standard onwards in which the user area of the eMMC can be configured, which is meant to make that area more reliable and present better performance. How manufacturers do implement the Enhanced User Area is not defined in the standard, though. If the device supports this configuration, then the boot and RPMB area partitions must be configured as enhanced storage by default.

As of the beginning of 2019, almost all eMMCs in production support Enhanced User Area, thus they have boot and RPMB partitions with this configuration enabled by default.

Pseudo SLC, also known as pSLC, is a configuration of the MLC NAND flash memory that uses half of the cells capacity - that is, instead of 2 bits per cell, uses 1 bit per cell - to improve the reliability, performance and endurance of the eMMC. In practice, the pSLC mode is in-between SLC and MLC.

A few remarks about enhanced mode are presented below: