How to Lower CPU Power Consumption

Stress the CPU with stress-ng tool​

This article used the stress-ng software to simulate heavy loads to the CPU.

To install it, follow the guide Build a Reference Image with Yocto Project/OpenEmbedded to get everything working for Yocto.

Then, you can run bitbake to create your image. The stress-ng package will be installed inside of it.

To stress the CPU, run:

Where <CORES> is the number of cores that will be stressed.

With this command, you can measure the baseline power consumption, by stressing all the cores and measuring the current that is being consumed by your device. Follow the next section to check how to lower the power consumption and then run the stress-ng again to compare the results.

In the next sections, there are some examples of how to lower the power consumption from the CPU. Choose the approach that better fits your project.

Six scaling governors are available in the kernel:

Run the following command to check which CPUs and governors are being used in your system:

Or if cpufreq-info is not available run the following command to individually check each CPU:

To check all the governors available for your CPU, run:

Change the Scaling Governor to Power Save​

There are two ways to change the governor of your module, by either running:

Where X is the CPU that will be modified, or by using the CPUFreq:

Where X can be any valid CPU number.

Setting the scaling governor to powersave will keep the frequency at the lowest value possible, therefore reducing the power consumed by the module.

All these changes will only be set until the next reboot. Check the Change Governor Permanentely section to set a new governor permanently.

There are two approaches that can be used to change the CPU governor permanently:

The second method will be described in this section and it is recommended for production.

First, create a custom kernel config file. It can be done by using the bitbake command to customize the kernel configuration.

Before doing that, remember to follow the guide Build a Reference Image with Yocto Project/OpenEmbedded to get everything working for Yocto.

Once everything is set up, run: 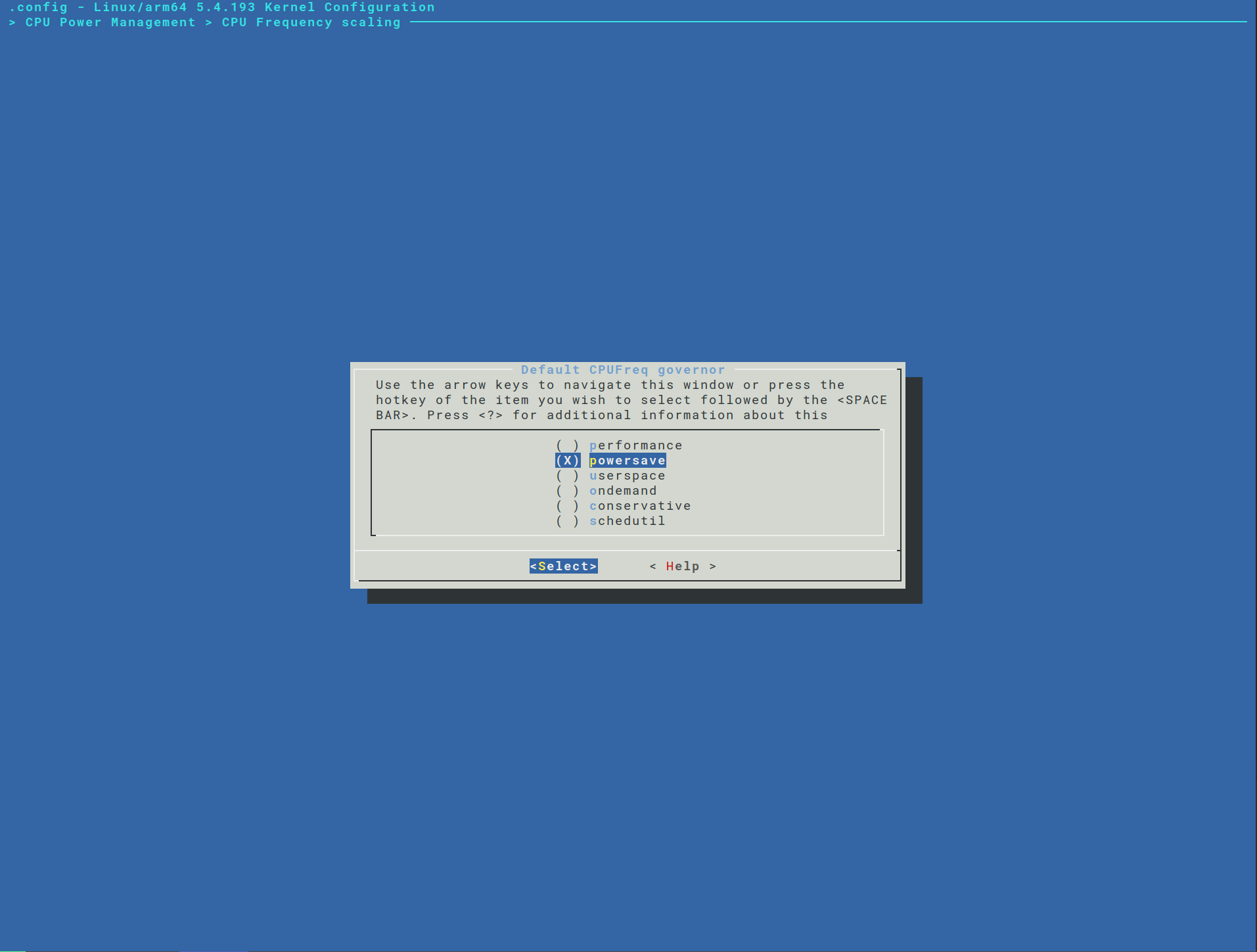 Your custom kernel configuration will be aplied automatically when you create the image with bitbake. For more information, follow the guide Customize the Kernel.

In order to disable a core inside linux, run the following command:

Where X is the number of the CPU core. After that, a kernel message will be displayed:

Meaning that the CPU is now offline.

You can run this command for every core that is available in the module, but at least one core should be online for Linux to work.

You can enable the CPU again by running

However, if your application is already running, it will not make use of more cores than were available at launch.

The CPU will only be offline until the next reboot. To change it permanently, check the section Limit the Number of CPUs Permanently.

Limit the Number of CPUs Permanently​

Go to the u-boot terminal by pressing the space bar multiple times after the module has powered on.

To limit the CPU to one core. You can change this value to limit the number of cores.

Nest, save changes, and exit.

Now if you run the following command inside Linux Kernel, only one CPU will be available.

You can turn on the CPU cores again by running:

Where X is the number of your CPU.

With these commands, you can limit the number of active CPU cores, therefore reducing power consumption.

Limit the CPU Usage from a Service​

It is possible to limit the CPU utilization inside systemd by setting the CPUQuota variable. But to do that, first, we need to enable the CONFIG_CFS_BANDWIDTH kernel configuration.

First, open the kernel menu configuration as described in the section Change the Scaling Governor Permanently.

Before doing that, remember to follow the guide Build a Reference Image with Yocto Project/OpenEmbedded to get everything working for Yocto.

Once everything is set up, run: 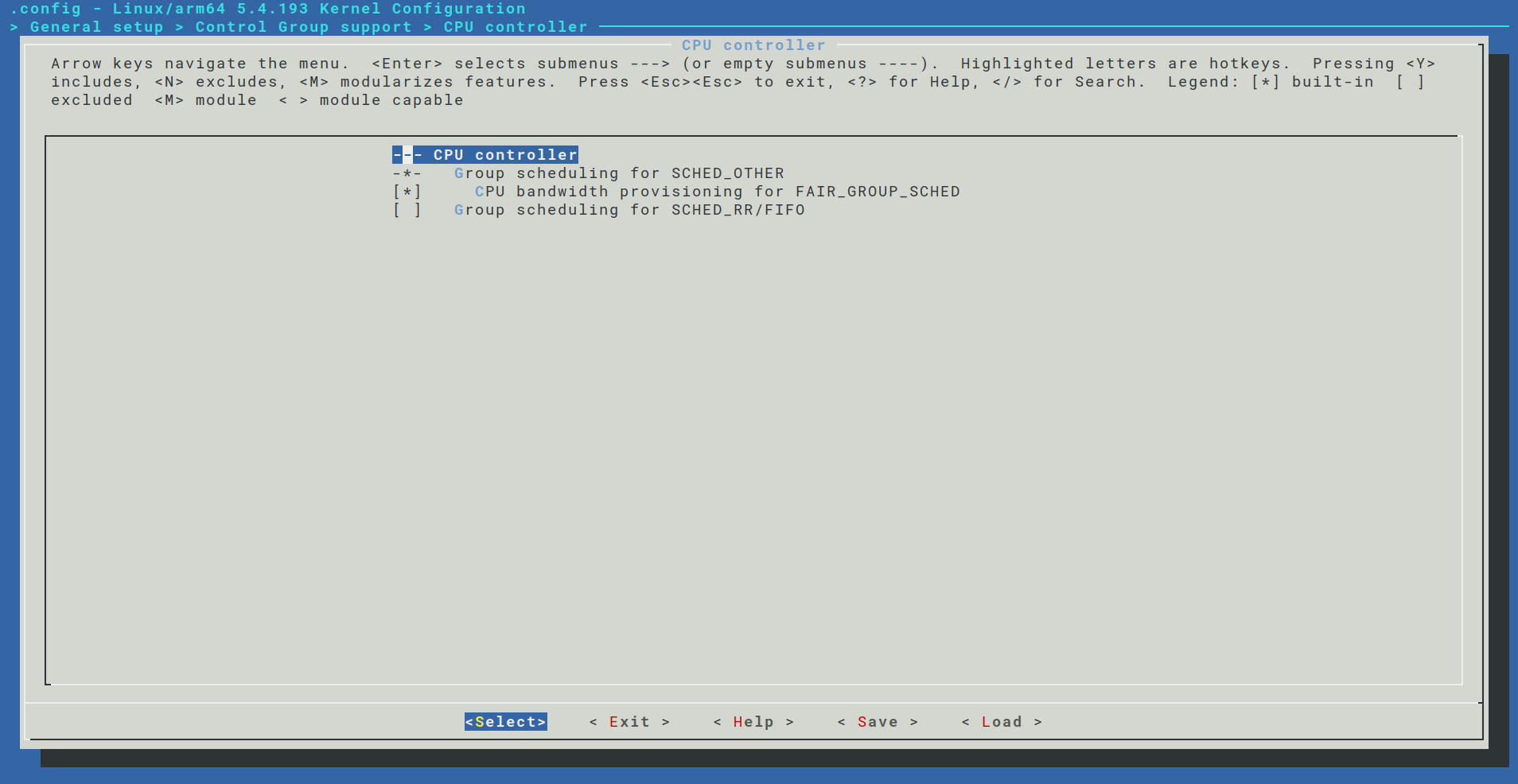 Your custom kernel configuration will be aplied automatically when you create the image with bitbake. For more information, follow the guide Customize the Kernel.

Next, your service should have the CPUQuota variable inside the configuration file. Check the example with a custom service called cpu-limited.service below.

This service will run the following shell script:

Disable Frame Buffer if no display is being used​

It is possible to turn off the screen if no display is attached to your hardware. Doing that, all the peripherals related to display support will be disabled.

If the frame buffer is available, it is possible to run the following command to disable it.

If the GPU is not being used, it will be automatically shut down by the processor.

For Colibri iMX8X, this can be checked by running:

to check the idle status of the GPU.

If you are using Apalis iMX8, you can run:

To check both GPU's current states. It is possible to check the IDLE time as well, by running:

The command will show the total time the GPU was used since your module started. With this information, you can make sure the GPU is not being used, therefore, keeping the power consumption lower.