This feature is a work in progress. The release date is estimated to the end of Q2 2022.

Offline Updates is a feature soon to be released in Torizon. It is an alternative for the already available Remote Updates, although they use the same technology stack: OSTree and Aktualizr. Offline Updates brings the capability to perform secure application and OS updates to Torizon devices that may not be able to update remotely. For example, devices that never connect to the internet or have limited bandwidth. 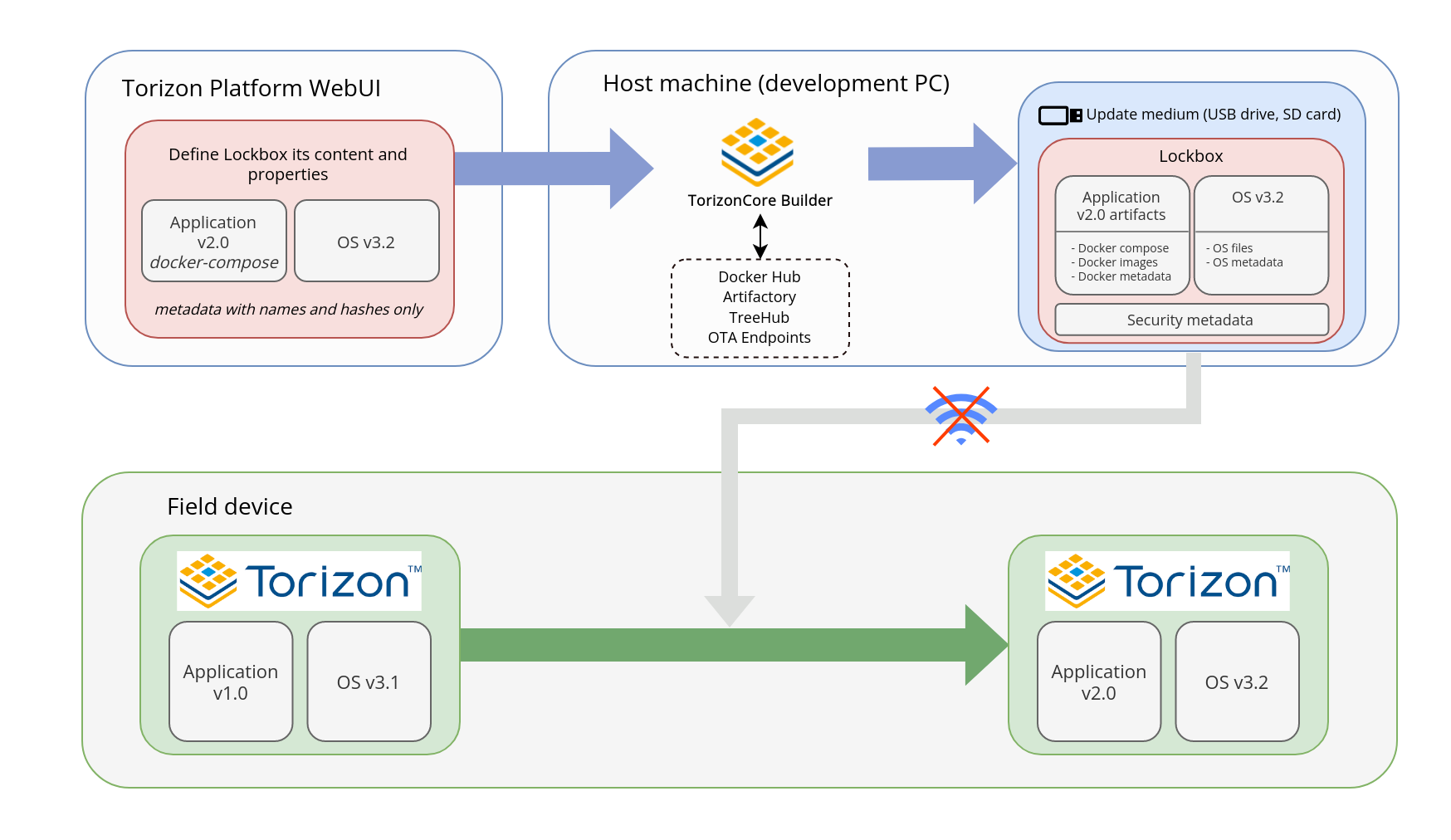 Many of the names and technologies used in Remote Updates are also used in Offline Updates. However, this feature requires some new unique terminology:

Lockbox is central to using Offline Updates. In this context, the Lockbox can be thought of as the object that will be used to perform the update. In other words, it contains all the required files that will be deployed to the updating device, along with the metadata necessary to make it a secure operation. The Lockbox can contain an OS update, an application update, or a synchronous update where both components update together.

A Lockbox must be first defined in the Torizon Platform, and later created with TorizonCore Builder. After the Lockbox is created, it is loaded into an update medium (USB drive, SD card) which is inserted in the device to initialize the update.

Main features and use cases​

Like the Remote Updates counterpart, with the Offline Updates feature it is possible to:

The whole process of updating a device offline is similar to the Remote Update process.

The first step is to define the Lockbox in the Torizon Platform. This definition holds all the information necessary to create the Lockbox. Remember, the Lockbox itself will contain all of the files required for the update as well as the necessary metadata to make it a secure process. To define a Lockbox you have to:

Now that you have the update medium, it becomes a matter of physically going to the device and deploying the update:

The update process is fully automated and no user intervention is required at any time. If you are performing an OS or synchronous update, the board will automatically reboot once.

As mentioned before, the Offline Updates feature shares the technology stack with the Remote Updates feature. Both of them allow updating the OS and/or the application in a deployed device. Their main difference is where the update comes from.

You will need a provisioned device in order to securely update it, regardless of choosing Remote or Offline Update.

Note that you currently cannot have both sources of updates enabled at once. The device must be configured to receive either Offline or Remote Updates. By default, devices disable Offline Updates in favor of Remote Updates.

The same technologies that are used in Remote Updates are also used in Offline Updates. For more information, it is recommended to read the Torizon Remote Updates Technical Overview article. It highlights the roles of:

Toradex has presented webinars about Secure Offline Updates and you can watch them on demand.

Learn more about this webinar on the landing page, or watch it below: